The Taxi Charity was deeply saddened to hear of the death of WWII veteran Alan King on 30 December 2021. 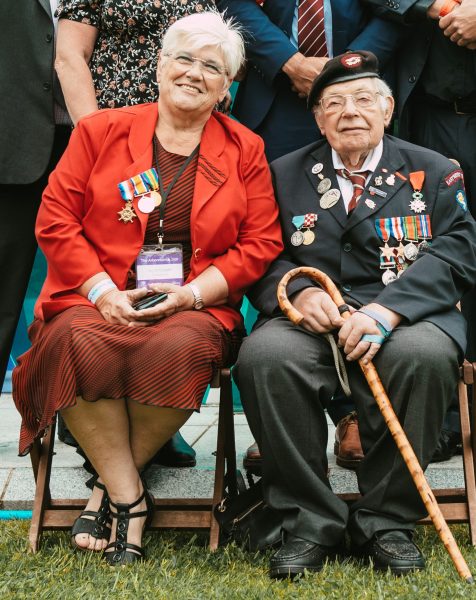 WWII veteran Alan King, 97, who lived  near Eye in  Suffolk loved attending Taxi Charity trips with his daughter Joyce Cooper. This summer they joined other veterans and charity volunteers over the D Day weekend at the National Memorial Arboretum to witness the opening of the British Memorial in Normandy.

Born in May 1924, Alan was a Dad, Grandad, Great Grandad, Brother, Cousin and a Comrade and friend to other WWII veterans.

His Daughter, Joyce Cooper who accompanied her Father on Taxi Charity trips said,

“Dad was so loved and is so missed. He had a unique sense of humour and was a wonderful Churchill impersonator. Rest in Peace dear Dad, forever missed.”

“Alan was a man of diminutive stature with a huge personality. He was quick witted, had a real passion for his beloved Suffolk, and it was always a delight to be in his company.”

“I first met Alan when he joined the Norwich branch of the Normandy Veterans in 2013. Like many others, with age, his war years seemed to be more in his thoughts, especially of Corporal Louis Wilkes who passed away in Alan’s arms inside their Sherman Tank. I was fortunate to return Alan to Cambes en Plaine war cemetery in Normandy where Corporal Louis Wilkes rests peacefully on two occasions and witness this emotional reunion as well as many other events and outings with the Norwich Normandy Veterans. I also managed to get Alan accepted to the Stichting Nederland Amerika pilgrimage in the Netherlands which he really enjoyed and returned several times making many friends.

“Alan was certainly generous with his time, talking with the younger generation about his wartime experiences with vivid memories.

“He lived in a very quiet piece of Suffolk and enjoyed Southwold but didn’t wish to enter the sea because of his memories of Normandy. I consider myself very fortunate to have been friends with Alan and will end my tribute with the few words we always used when parting company ‘Keep yew a troshin bor’.”