Peter Carey has been a London licensed cabbie for twenty years, six years ago he joined the Taxi Charity as a volunteer, joining the committee a year later, on one of his first trips he met WWII veteran Ron Johnson and they have become great friends. 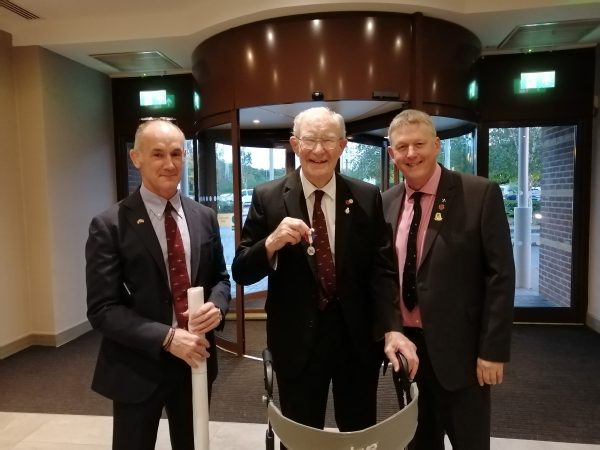 Before WWII, Ron Johnson was in a Territorial Battalion of the Essex Regiment. After he was mobilised on 1 September 1939, ​he was sent to one of their Searchlight Battery’s. ​ Ron stayed with the Essex Regiment in various roles until he was commissioned in 1943. ​He then applied to the Glider Pilot Regiment as he had already passed Aircrew Selection and was accepted for glider training.

As he was held in reserve on D Day, his first Operational flight was Operation Market Garden, the battle for the Bridge at Arnhem, in September 1944. One of the major battles of WWII.

During the subsequent fighting at Oosterbeek he was wounded twice, first by a mortar and then by a sniper. It was lucky that the sniper’s bullet hit him in the back and exited through his shoulder. Ron was later taken to a hospital for treatment, but it was overrun by Germans and he was taken prisoner.

Ron headed to Germany, with many other wounded soldiers, locked in a cattle truck for four days and three nights and was held as a POW in Spangenberg Castle for six months. In April 1945, as the Americans got closer, the Germans began marching the prisoners towards the east and Ron and fellow glider pilot, Bob Garnett took their chance one evening and escaped into the hills. On the same night, the Duchess of Cornwall’s father, Major Shand, who Ron had known in the castle also escaped and headed for cover in the same hills. Ron and Bob spent eight nights hiding in the hills, with very little sleep and just a few biscuits to eat until the Americans arrived. The Americans put Ron and Bob in a house overnight and the next morning a French worker took them to a local airfield where the Americans flew them to Paris.

After a night in Paris, which Ron spent fast asleep, thanks to an injection from a Doctor to help him rest, they took a train to the coast and were flown back to England in a Dakota. Ron made it home safely for VE Day and celebrated into the early hours outside Buckingham Palace with another officer and three girls from Scotland.

“The Taxi Charity is full of absolutely wonderful people who look after us veterans so well – they are a terrific bunch of fellows. I have been on trips with the charity to France and Holland and Peter Carey is my regular driver. Peter and I have become great friends and he phones me often. When we get out of lockdown and restrictions allow, I look forward to him being able to visit with Chris Willmott another Taxi Charity volunteer, so that we can have lunch and a few pints in my local.”

“Time and time again we see the relationships between our volunteer cab drivers and the veterans they take on our trips, develop into lifelong friendships. These special friendships are a huge bonus of being a volunteer for the Taxi Charity and are appreciated as much by the cabbies as by the veterans.”