You are here: Home / News / News / WWII Veteran Hopes To Reunite With Child He Met In Normandy In 1944

WWII Veteran Reginald Pye has a vivid memory of sharing his food with a young French girl in 1944. He would love to reunite with the child who will now be in her nineties. 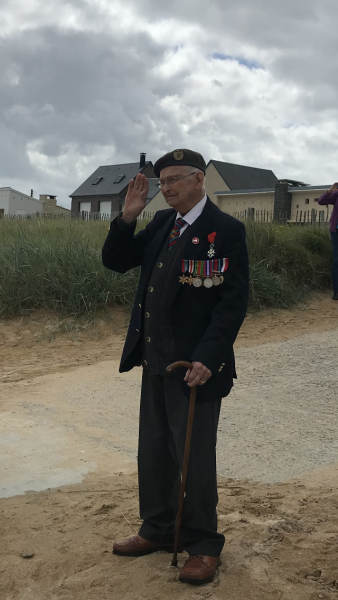 The Taxi Charity for Military Veterans has just returned from a trip to Normandy for the D Day commemorations with a group of WWII Veterans. During the trip one of the veterans shared a moving story of one special moment in France.

Reg Pye, 98 from Berry Port, served with the 224 Field Company, Royal Engineers as a driver carrying sappers, mines and ammunitions.  He landed on Sword beach and one night as he moved through  Normandy his convoy was held up in a town in France for an evening. Their food that night was a meagre piece of bread with jam. As he was about to eat his, he saw a young girl starring at him. She looked as if she was desperately in need of food so without hesitation Reg gave her his bread and jam and she hurried away. The next morning, he awoke to find a picture of her, with a message on the back and his mess tin half full of milk. A beautiful gift to thank him for sharing his dinner with her. 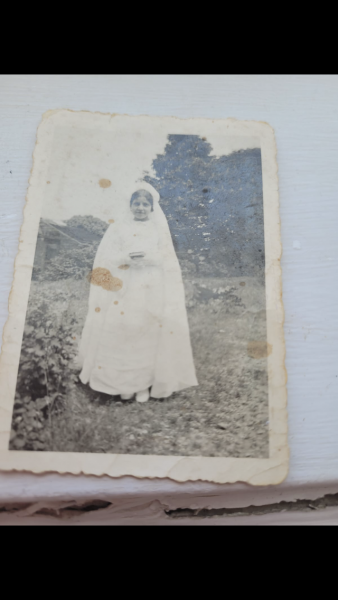 “The memory of my very brief encounter with this young girl will stay with me forever. In the bleakest of times this bit of humanity interaction made a huge mark on my life. I went back to Normandy about fifty years afterwards to try and trace her but unfortunately, I wasn’t successful.  I would love to ask her if she has any recollection of our meeting and I hope that with the picture of her and the wording on the back of the image, someone might be able to help me trace her, so that I can tell her how much I treasure that memory.”

“I feel privileged to have spent a week with the veterans in Normandy for the D Day commemorations. Over the days we hear many amazing stories but this one from Reg really touched me and I would love to be able to see his wish come true to meet her or her family.”

If you have information which might help Reg trace this young girl, please email dickgoodwin@taxicharity.org

The message on the photo says

A girl named Huguette Geoffroy was photographed in front of the presbytery when she was 14 years old at Vrigny in the Orne department.