A Second World War veteran from Allestree, Derby was taken to pay his respects to his fellow soldiers following the D-Day 75th Anniversary. 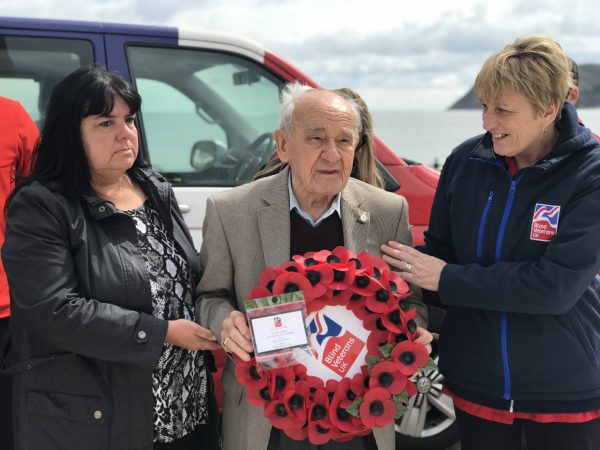 Blind veteran Henry Szmydt, 93 and originally from Poland, was unable to attend the 75th anniversary commemorations that were organised on the Llandudno pier by Blind Veteran UK. After watching D-Day commemorations on the television and wishing he that could have paid his respects, the charity invited him back to the cenotaph to lay a wreath. Henry says: “The anniversary of D-Day brings back lots of memories every year. When I was discharged from the military I felt lost and forgotten. I will always remember though”.

Henry started receiving support from Blind Veterans UK in March and he was taken to the cenotaph during his induction week at the charity’s training and rehabilitation centre in Llandudno. Henry says: “I feel so thankful to Blind Veterans UK for organising the visit to the cenotaph for me. I have been to commemorations in Derby before but I’ve only been there from a distance. It’s more difficult for me to get around now so it meant a lot to me to be taken to pay my respects”.

Henry joined the Eighth Infantry, 2nd Tank Regiment and undertook his training in the UK. He served in Italy and most notably in the Battle of Monte Cassino during the Occupation of Italy. At the end of the war in 1945, he was unable to return home to Poland due to the Soviet Union rule. He says: “We couldn’t go home. Our parents told us to not come back because it wasn’t safe so I went to England where I married and had a family”.

Kathy Boardman, Centre Manager at the charity’s Llandudno centre says: “It was a great privilege for the team in Llandudno to be able to do this for him and to see the impact the Introduction week had on him whilst he was with us”.