On 17 March, WWII Veteran Ray Whitwell from Malton, North Yorkshire will be 103, he will celebrate with his daughter Jill. 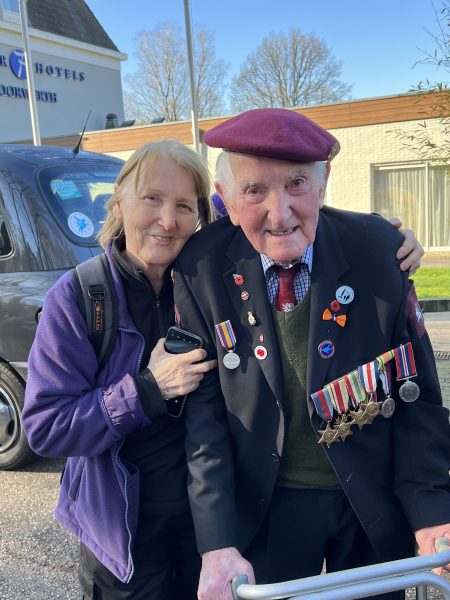 At the end of  February 2022, at the grand old age of 102,  Ray Whitwell joined  the Taxi Charity on their trip to The Netherlands. Ray kept everyone entertained throughout the weekend  with his wicked sense of humour and was keen to tell those he met that he was 102 and 11 months.

Ray fought at the Battle of Arnhem, so the visit brought back many poignant memories, During the weekend he visited the Airborne Museum at Hartenstein, which pays tributes to the allies who fought in Arnhem as well as  the Commonwealth War Graves Cemetery to pay his respects to his friends and comrades who didn’t come home.

Ray landed in The Netherlands in September 1944 for Operation Market Garden  where more than 600 gliders were towed into battle to secure the River Rhine crossings and advance into northern Germany. He says of that time with his usual acerbic sense of humour  “We went nine days without food during the Arnhem conflict and then snipers shot holes in the bucket we were collecting water in.”  One of the lucky ones, he evaded capture as he crossed the Rhine and made his way back to British lines.

“I have been Ray’s regular driver for Taxi Charity trips for many years. I drive to Malton to pick him up and our journeys are always very entertaining. He is amazing for his age  and thoroughly enjoys these  charity visits to the areas that he knows well from the war. We will be returning to The Netherlands in May with Ray for the Dutch Liberation commemorations and will raise a special toast to this lovely man for his 103rd birthday.”

Ray will be celebrating his birthday on 17 March with his daughter Jill who will be taking him for lunch.