Ron Johnson from Shrivenham, Swindon, will be celebrating his 100th birthday on 9 October with a party.  Ron was born on 9 October 1921 when King George V was on the throne and David Lloyd George was Prime Minister. 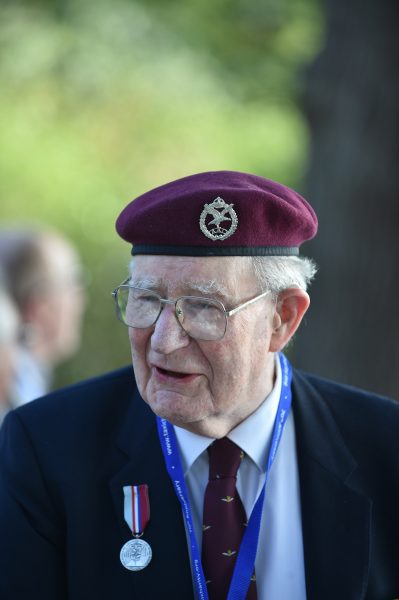 A glider pilot during WWII, Ron was held in reserve on D Day, and his first Operational flight was Operation Market Garden, the battle for the Bridge at Arnhem, in September 1944. One of the major battles of WWII.

During the subsequent fighting at Oosterbeek he was wounded twice, first by a mortar and then by a sniper. It was lucky that the sniper’s bullet hit him in the back and exited through his shoulder. Ron was later taken to a hospital for treatment, but it was overrun by Germans, and he was taken prisoner.

Ron headed to Germany, with many other wounded soldiers, locked in a cattle truck for four days and three nights and was held as a POW in Spangenberg Castle for six months. In April 1945, as the Americans got closer, the Germans began marching the prisoners towards the west and Ron and fellow glider pilot, Bob Garnett took their chance one evening and escaped into the hills. On the same night, the Duchess of Cornwall’s father, Major Shand, who Ron had known in the castle also escaped and headed for cover in the same hills. Ron and Bob spent eight nights hiding in the hills, with very little sleep and just a few biscuits to eat until the Americans arrived. The Americans put Ron and Bob in a house overnight and the next morning a French worker took them to a local airfield where the Americans flew them to Paris. After a night in Paris, they took a train to the coast and were flown back to England in a Dakota.

“I met Ron through the Taxi Charity for Military Veterans, when I became his driver on charity trips, and we have become great friends. On his birthday I will driving Ron to an afternoon birthday celebration in Faringdon where I know that his friends will ensure he has a fabulous party and will keep his glass topped up with his favourite tipple, a shandy.”

“The Netherlands based Market Garden Foundation has been working with the Taxi Charity for Military Veterans for 15 years and I am delighted that over that time Ron has become a very  good friend and I will be making the journey to the UK to be with him at his party to  celebrate his 100th birthday. We will be bringing a special gift for Ron, from the mayor of Renkum Agnes Schaap, as they like each other very much!”

“Ron always amazes me with his witty comments, but mostly with his great stories about his experiences during the Battle of Arnhem. On several occasions he told his audience about the days in September 1944, whereby the history of ‘those men in their flying machines’ very much came alive.  He is a charmer with the ladies. I vividly remember him asking the mayor of the municipality of Renkum with a big smile.

‘Are you married?’ whilst sitting next to her in a golf buggy during the Airborne March a few years ago. A truly remarkable character and I wish him a glorious 100th birthday.”

Richard Piso, Dutch Military and Air Attaché,  Embassy of the Kingdom of the Netherlands, said,

“A 100th birthday is such a huge milestone; however, we should remember it in conjunction with your contribution to the liberation of the Netherlands, 77 years ago at Arnhem. As you celebrate your birthday, we will ensure that everyone in the Netherlands, is remembering and respecting the memory of what you did for our country and people. With huge congratulations and thanks, happy birthday.”