The OA has produced an infographic to sit alongside their latest report – funded by the Forces in Mind Trust (FiMT) and released last week. The report provides a definitive demographic profile of the serving and ex-officer community. 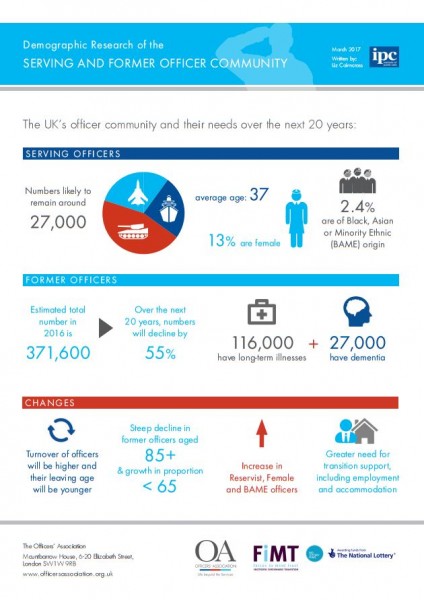 Demographic Research of the Serving and Former Officer Community, states that there are over 26,820 serving UK officers, and an estimated 371,600 veteran officers in Great Britain, including 19,200 over ninety years of age.

The Report projects that the number of veteran officers will fall by 55% in the next 20 years, because of the decreasing number of World War Two veterans. It is estimated that there are over 116,000 officers with long-term illnesses which significantly limit their ability to undertake day-to-day activities and over 27,000 with dementia. It also identified the likely changes to the population: a higher predicted turnover of officers, leaving the Services at a younger age; and more women as well as Black, Asian or Minority Ethnic (BAME) officers are expected to serve in the future.

Another challenge is the mind set of officers, who self-identified as ‘a proud community’ and tend to apply for help only when their problems are acute. Some interviewees acknowledged that officers (and their spouses) were more reluctant to ask for help than others, due to the culture and expectation of self-resilience. This could mean that when they did finally ask for help, their needs were greater and more complex.

Follow this link for a PDF of the Infographic.