Speaking in their new podcast episode for General Talk, hosted by Harry Bucknall, WO1 (AcSM) Colin Kirkwood talks to ABF The Soldiers’ Charity about being selected for the prestigious position of Academy Sergeant Major at the Royal Military Academy Sandhurst (RMAS), having joined the Army as a junior soldier aged 16. 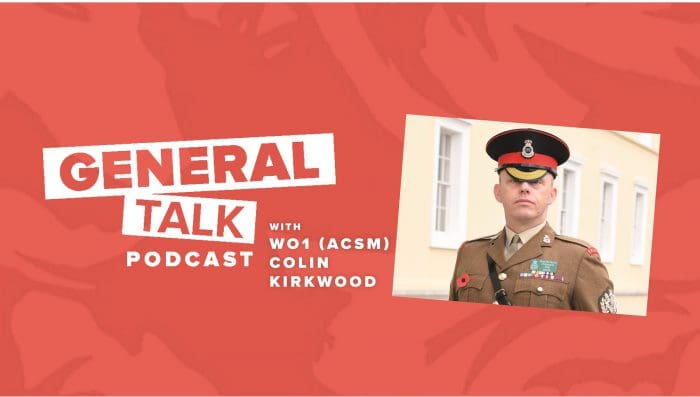 WO1 Kirkwood explains his role in mentoring and training Army officer cadets at RMAS; and ensuring they receive high standards of instruction and discipline. He tells us how Sandhurst provides “a leadership journey” for these young officers. Asked about the qualities needed for a British Army officer, WO1 Kirkwood stresses the importance of humility and leading by example:

“If you have people’s respect and trust they will follow you everywhere.”

As a Scots Guardsman with extensive military experience, WO1 Kirkwood also shares his personal memories of fighting the Taliban during a tour in Afghanistan where, sadly, he and his regiment lost comrades in battle.

Clearly excelling in a varied and colourful career, WO1 Kirkwood’s passion for the Army and his selfless commitment and drive to do the very best for all those under his care shine through.