The Royal Star & Garter Homes cares for ex-Servicemen and women and their partners living with a disability or dementia. They are people who in times past had the courage to risk their lives for their country. That bravery didn’t stop when they left the military. It is displayed every day in our Homes. 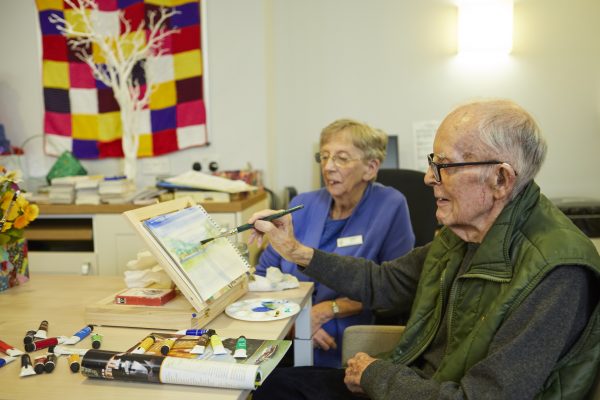 As we approach Armed Forces Day and celebrate the bravery of our troops past and present on 29 June, we look at one resident who possesses courage in abundance.

Ted Newton served in the RAF for 33 years between 1946 until retirement in 1979, attaining the rank of Wing Commander and serving his country in several military flashpoints around the world. He was inspired to sign-up as a teenage apprentice in 1946 after watching the Battle of Britain unfold in the skies above his home in Andover, Hampshire.

However, Ted’s distinguished military career was nearly cut short before it had taken off. In 1953, while training in Essex, the tail of Ted’s Meteor jet was broken off following a collision with an airborne target. He ejected from the jet but suffered a broken back and other injuries.

Over the next three years, Ted spent that time in and out of hospital and specialist units, including Headley Court. But he showed remarkable courage to not only recover from the accident, but to eventually return to the RAF and continue serving his country.

During his recovery, in 1954, he fell in love with the nurse that was caring for him. After six months, Ted and Barbara decided to marry, and the couple tied the knot later that same year.

Ted recovered and returned to the cockpit. He would go on to fly countless missions for his country and served in conflicts including Cyprus and Suez.

Ted continues to display immense courage at the age of 89 at The Royal Star & Garter Homes. Since moving to our Surbiton Home in 2017, he had made regular use of Home’s in-house physiotherapy service. He says the gruelling workout helps him cope with the pain he still suffers from that accident more than 65 years ago. He comments: “I go for daily physiotherapy sessions for balance and cycling. It’s exhausting and tiring but I like it. It helps me with my back problem.”

Ted takes part in many activities at the Home, and even attended an England RFU international at Twickenham. He painted The Royal Star & Garter Homes’ 2018 best-selling Christmas card, helping raise valuable funds for the Charity. He said: “I’m pleased it helped the Charity.”