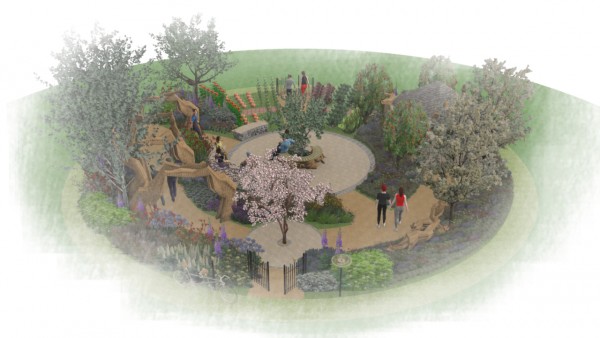 It was announced today (10/02) that military charity Blind Veterans UK will be sponsoring a special garden at the RHS Hampton Court Palace Flower Show in July.

The ‘It’s all about community garden’ has been designed by celebrated designers Andrew Fisher Tomlin & Dan Bowyer and it will be one of the largest show gardens at Hampton Court this year.

Blind Veterans UK is the national charity for vision-impaired ex-Service men and women. They support anyone who has served in the UK Armed Forces, or who has done National Service, who is now living with significant sight loss.

The garden will feature traditional stone, oak and willow, which will come together with ornamental trees, flowers, an orchard and a kitchen garden. The major structure is a willow vine sculpture that wraps around the whole garden. The sculpture, created by renowned artist Tom Hare, allows visitors to walk through parts and experience the textures, colours and fragrance of the garden first hand. They will also get to enjoy a number of art and craft sculptures and features made by blind veterans themselves.

Garden designer Andrew Fisher Tomlin said: “The blind veterans, volunteers and staff are an inspiring community that come together to ensure veterans recover their independence and discover a life beyond sight loss.

The charity was founded more than 100 years ago to support those blinded in the First World War. Now, the charity supports veterans regardless of when they served or how they lost their sight. The Blind Veterans UK community has grown and the charity now supports more than 4,000 veterans, more than ever before in its history.

After the Hampton Court Palace Flower Show, the garden will be divided between the charity’s two main training and rehabilitation centres in Llandudno and Brighton.

Garden Designer Dan Bowyer added: “It is not the traditional idea of a ‘sensory’ garden for vision impairment but celebrates the ability, activity and vibrancy of the blind veterans the charity supports.

“We are so proud to be working with Blind Veterans UK once again. Our work with the charity has already been recognised by the RHS with outstanding neighbourhood awards in Wales in Bloom in 2015 and 2016.”

For more than a century, the charity has been providing vital free training, rehabilitation, equipment and emotional support to blind and vision-impaired veterans no matter when they served or how they lost their sight. If you, or someone you know, served in the Armed Forces or did National Service and are now battling severe sight loss, find out how Blind Veterans UK could help by calling 0800 389 7979 or visiting noonealone.org.uk.