You are here: Home / News / News / British Empire Medal for Tina “all the more meaningful” in Queen’s Platinum Jubilee Year

Tina Graham – SSAFA’s Overseas Regional Chair based in Cyprus – was presented with her British Empire Medal (BEM) on March 16 by HE Stephen Lillie, British High Commissioner Cyprus. This followed the award last year in Her Majesty The Queen’s Birthday Honours for Tina’s decades of service to SSAFA, the Armed Forces charity as well as the wider British expat community on Cyprus. 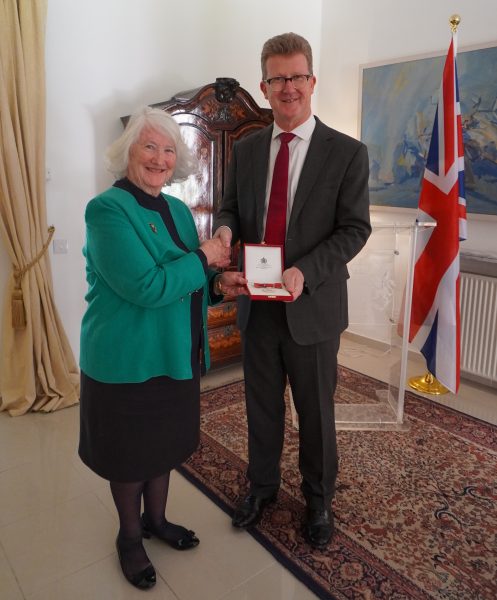 Tina – originally from Alyth, Perthshire – has been working with SSAFA for 36 years. In 1986, she opened a SSAFA office in Belize where her husband was posted at the time. Before this, Tina was in the Princess Mary’s Royal Air Force Nursing Service, leaving in 1973 as a Flying Officer.

She returned to the UK in 1988, becoming a caseworker at the Warwickshire branch of SSAFA, as well as being a midwife and manager at Rugby St Cross Hospital. Moving to Cyprus some 15 years later, she continued her voluntary work with SSAFA first as a caseworker, then Branch Secretary, Branch Chairman in 2011, until her current role as Overseas Regional Chair. Tina has also been SSAFA Assistant Director for Overseas and Clinical Governance, as well as Chief Executive of two London hospitals.

Of her BEM, Tina said:

“Having worked for SSAFA for 36 years, this presentation is the cumulation of a lot of hard work with my colleagues and the teams around me to support our serving and veteran community over the years.

“I am incredibly proud to have been presented with my BEM, which is all the more meaningful because it’s taken place in the Platinum Jubilee year of Her Majesty The Queen, both our Monarch and SSAFA’s Patron.”