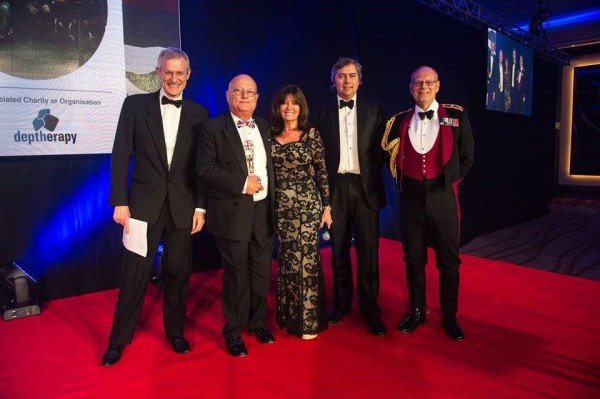 The outstanding work of scuba diving rehabilitation charity Deptherapy & Deptherapy Education has been recognised with the presentation of a top military Award.

Richard Cullen, Founder and Chairman of Deptherapy & Deptherapy Education, received the Soldiering On Award on behalf of the charity at a black tie gala event at the Westminster Park Plaza in London on Friday 20th April 2018.

Deptherapy & Deptherapy Education was judged by an independent panel to be the winner in the Healthcare & Rehabilitation (Group) category. This Award, sponsored by Redwood Technologies Group, was given in recognition of the charity’s exceptional contribution to recovery and rehabilitation of former members of the British Armed Forces Community.

The Soldiering On Awards, now in its eighth year and under the patronage of the Rt Hon Earl Howe PC, Minister of State in the House of Lords, honours those who have served within the British Armed Forces and the organisations supporting them.

Guests at the Awards ceremony included Deptherapy Programme Members and Trustees, who were inspired by stories of those veterans who have overcome remarkable adversity. Classical singer Carly Paoli and the London Military Band provided the evening’s entertainment, whilst the hosts for the event were Vicki Michelle MBE and Jeremy Vine.

On receiving the Award, Richard Cullen said: “Winning the Healthcare and Rehabilitation Category at the prestigious Soldiering on Awards in London was a stunning achievement given the very stiff competition we faced in the group.

Huge thanks to the team at Soldiering On, those who nominated us, the Judges and Redwood Technologies Group for sponsoring the Award. However, the highest praise goes to the Trustees, Patrons, Ambassadors and Volunteers who work tirelessly and for free to help our Armed Forces’ veterans.

I sincerely hope that this major acknowledgement of our work will act as a key to open the door to corporate sponsorship, which we so badly need.”

The Soldiering On Award is the second prestigious Award this year for the Deptherapy charity. Deptherapy Programme Member and Ambassador Ben Lee received The Recognising Achievement Award at The Royal Foundation’s Endeavour Fund Awards in February 2018 in the presence of HRH Prince Harry and Ms Meghan Markle.

Deptherapy & Deptherapy Education is an English Charity registered with the Charity Commission. It seeks to rehabilitate UK Armed Service personnel and veterans who have suffered life changing mental and/or physical challenges through specially designed Scuba Diving Programmes. It also provides 24/7 support to Programme Members. Deptherapy is widely respected for changing the lives of those who come on the Programme. Many Programme Members have suffered limb loss and or acute mental illness. 80% of Programme Members suffer from PTSD or other acute forms of mental illness. The charity also provides
education in adaptive scuba diving techniques to Dive Professionals.

By @Cobseo 50 minutes ago