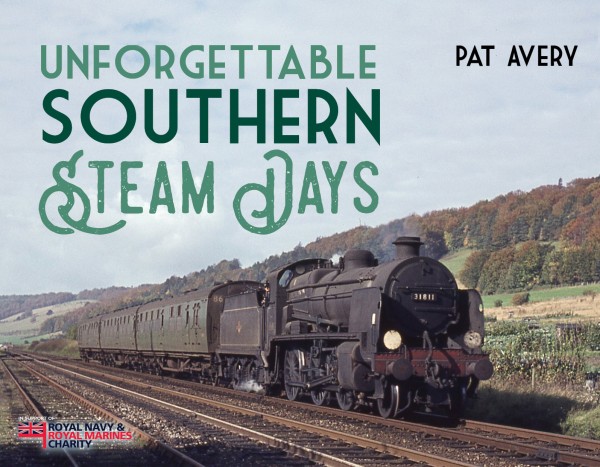 Travel back in time to the golden age of steam train travel with a brand new book which is fundraising for The Royal Navy and Royal Marines Charity.

Commemorating the 50th Anniversary since the end of regular steam hauled trains in Southern England back in 1967, Unforgettable Southern Steam Days features top quality photographs from the 1960’s, together with informative text, presented in a 64-page luxury book.

Take a nostalgic trip down the line from London to Surrey, Sussex, Hampshire and Dorset!

This all colour book authored by Pat Avery, a charity partner for The Royal Navy & Royal Marines Charity, principal charity of the Royal Navy, is the follow up to his Battle of Jutland centenary book Duel in the North Sea HMS Ambuscade at Jutland, which has so far raised more than £1,100.

Unforgettable Southern Steam Days which is published on April 20th 2017 will be sure to add significantly to this figure, with all funds from book sales going directly to the charity, whose purpose is to support sailors, marines, and their families, for life.

Lauren Wileman, Head of Fundraising at The Royal Navy and Royal Marines Charity, says: “Pat’s first book has left an indelible mark on those who have had the pleasure of reading it. I’m certain his new work will be just as successful. We’re once again thrilled that Pat is supporting the charity through sales of Unforgettable Southern Steam Days.”

About The Royal Navy and Royal Marines Charity