Mesothelioma UK’s ‘Supporting our Armed Forces’ project has been shortlisted for the Military and Civilian Health Partnership Award at the 2020 HSJ Awards, recognising an outstanding contribution to healthcare. 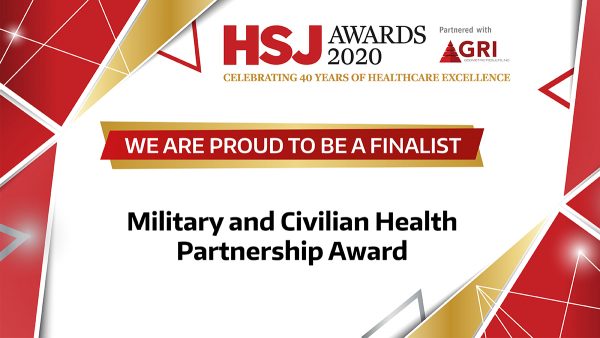 Mesothelioma UK has been shortlisted despite the tough competition from over 1,000 entries. The ‘Supporting our Armed Forces’ project has been selected based on ‘the ambition, visionary spirit and the demonstrable positive impact that their project has had on patient and staff experiences within the healthcare sector’.

“The UK has the highest incidence of mesothelioma in the world; this disease shouldn’t happen to anyone, least of all people working in public service such as our Armed Forces. We owe it to them to address the UK’s asbestos legacy, to prevent exposure and raise awareness about the dangers of asbestos. For those already living and dying because of their exposure we have to ensure our wonderful NHS is at its fighting best.

“This project was all about doing just that, making sure that our veterans get the very best care possible, connecting services and organisations to achieve that and shining a light on the impact the UK’s asbestos public health disaster is having on our armed forces. It has been an honour and privilege and we sincerely hope, working with our Armed Forces and the NHS we can go from strength to strength.”

Now in its 40th year, the HSJ Awards is the largest annual benchmarking and recognition programme for healthcare. Through a rigorous, fair and transparent judging process, the awards produce a roll call of the best organisations, teams and people in the NHS and the wider health sector.

The judging panel is made up of a diverse range of highly influential and respected figures within the healthcare community including: Sir Bruce Keogh, Chair, Birmingham Women’s and Children’s FT, Mark Axcell, Chief Executive, Black Country Healthcare FT and Caroline Beardall, Director of Workforce and OD, NHS England and NHS Improvement – South East.

The full list of finalists for the 2020 HSJ Awards can be found on the HSJ website. Winners will be selected ahead of the ceremony, which will take place virtually in March 2021.