It is announced that the Military Wives Choirs will tour UK cathedrals and military churches in 2017 with their twelve-date “Home For Christmas” Tour.

The choirs, all made up of wives and partners of Armed Forces personnel as well as women from the wider military community, will be delivering a festive treat from Wednesday November 22 when they begin their tour at the beautiful Worcester Cathedral.

The choirs will then perform at cathedrals and military churches across the UK:

Tickets for the Home For Christmas Tour are available now from www.ticketmaster.co.uk/militarywiveschoirs 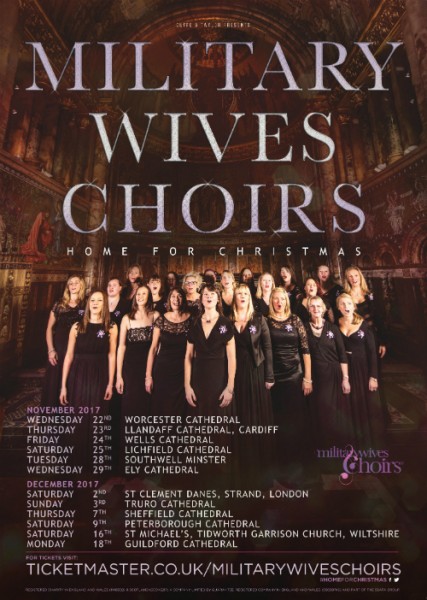 Christmas is all about spending quality time with family and friends, yet this can be particularly tough for serving families when loved ones are away, unable to be together over the festive season. The exclusive concerts will bring together ladies from Military Wives Choirs across the UK who understand just how tricky this time of year can be, giving them the chance to stand stronger together and express themselves through song.

Guests can expect to hear plenty of their festive favourites as well as songs from the Military Wives Choirs’ own album Home for Christmas which will be available to purchase, allowing the audience to take that merry feeling away with them while showing their support for women in the military community.

“For many ladies, the choir is more than just a chance to sing; it acts as a constant in amongst the unpredictability of life in the Forces. Our ethos is ‘sing, share, support’ and members often see their choir as a second family that they can depend on, especially at Christmas time.

“This tour celebrates the Military Wives Choirs family, bringing ladies from across many different choirs together at this special time of year to stand stronger together. We would encourage everyone to come and show their support for women in the military community this Christmas for a very special evening.”

With more than 70 Military Wives Choirs in military bases across the UK and overseas, the charity brings women in the community closer together through singing. Choirs are open to anyone with a military connection with no singing experience necessary, offering the chance for women to have fun and sing, share and support one another.

Last year the charity embarked on their first Home For Christmas Tour taking in cathedrals across the UK.

The 2017 tour is presented by event promoters Cuffe and Taylor.

Cuffe and Taylor Director Peter Taylor said: “The Military Wives Choirs make up the nation’s most beloved choirs and we cannot wait for this tour to begin.

“The choirs are incredibly talented and unique in terms of their social purpose to bring together the wives and partners of servicemen and women.

“We were delighted to take the Military Wives Choirs around the UK last Christmas and the wonderful reaction from audiences they sang to will live long in the memory. This tour will be very popular around the UK so we advise booking your tickets now to avoid disappointment.”

Tickets for the Home For Christmas tour are available from now from www.ticketmaster.co.uk/militarywiveschoirs

With over 70 choirs in British military bases across the UK and overseas, the Military Wives Choirs is a charity that brings women in the military community closer together through singing. Being part of a Military Wives Choir makes a positive difference to women’s lives by improving well-being, building friendships and developing skills. For more information, visit the website: www.militarywiveschoirs.org

‘Home for Christmas’ album
With 65 participating choirs based in the UK and overseas, ‘Home for Christmas’ is the Military Wives Choirs’ biggest project yet. The choirs, comprising over 1000 singers, can all be heard on the title track and the album also features six classic carols which have been updated with lyrics reflecting what Christmas means to women in the military community https://militarywives.tmstor.es/

Issued on Behalf of Cuffe & Taylor

Cuffe & Taylor is officially one of the UK’s top 10 live music and event promoters with offices in London and the North West.

Established for more than seven years, they present breath-taking tours, festivals and shows across the UK.