Earlier this year the Military Wives Choirs were the recipient of part of a grant awarded to SSAFA, the Armed Forces charity by the Department for Digital, Culture, Media and Sport (DCMS) to help alleviate loneliness and isolation amongst the Armed Forces community during the Covid-19 outbreak and pandemic. 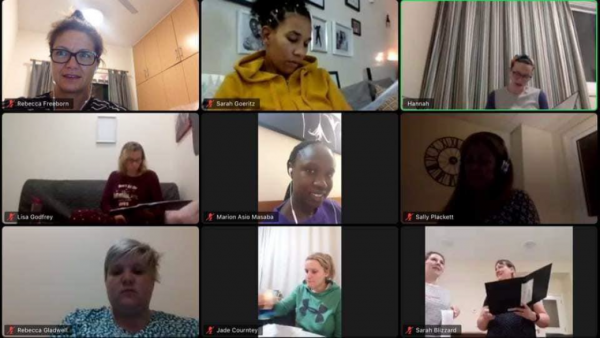 As an incentive, the Military Wives Choirs held a virtual taster session, bringing potential members together for a preview of online music-making during Covid-19. The choirs are open to women from across the military community, not only wives, and the session introduced themes of music for wellbeing and mental health, some well-loved and new songs and a chance to develop new skills and feel closer together through singing.

“It was really moving to take part in the virtual sessions watching women of all ages and backgrounds come together to sing and have a bit of fun.

After warming up and having a good sing we were put into virtual breakout rooms to introduce ourselves and have a chat.  I have felt quite lonely and isolated at points during the pandemic and wanted to join the choirs for that reason. Hearing other women say the same thing in the breakout rooms really brought home that I am not alone in these feelings and connecting together in the group is a great way to help. Really looking forward to joining my local choir when the pandemic allows.”

“I would urge you to consider joining the Military Wives Choirs; we bring women from across the military community together to sing, share, and support one another.”

“Choir is a really important evening in my busy week, where I can set aside some time just for me and really feel part of a community. The pandemic has been a challenging time, but we have continued to feel stronger together.”

The Military Wives Choirs is part of the SSAFA, the Armed Forces charity family.

Email joinus@militarywiveschoirs.org for further details and to sign up for an exciting virtual taster session.