Forces in Mind Trust has published a new Impact Report, celebrating 10 years since it was established. The report features some of the most impactful projects the Trust has funded since it was set up in 2011. 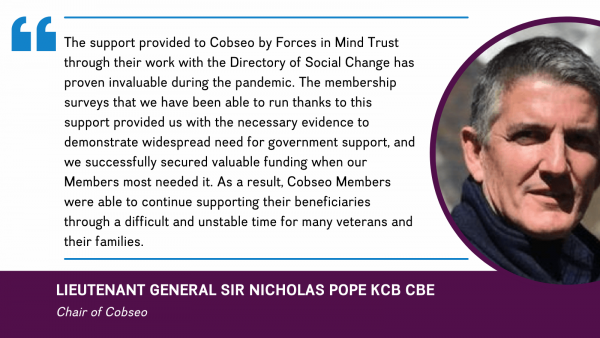 2021 also marked the mid-point of the 20 year spend down of the endowment from the National Lottery Community Fund which it was established with.

Over the last decade, £24.3m has been awarded to 176 projects. The Impact Report shares how these projects have helped to achieve Forces in Mind Trust’s mission to enable successful and sustainable transition to civilian life, delivered by identifying the barriers to successful transition, finding out what works to address these barriers and using this evidence to bring about change that has an impact on the ground. Projects featured in the report include:

The Impact Report is the first to be published since Mike Ellicock took over as Chief Executive from Ray Lock CBE in 2021. It also includes information about the Trust’s activities in 2021.

It is now available to view online, or you can request a paper copy.

“Having taken over as Chief Executive in 2021, this felt like the right time to reflect on the impressive achievements so far and I would like to thank everyone who has played a part in bringing Forces in Mind Trust to where it is today. I hope that this report will be of interest to everyone involved in supporting veterans and their families – it clearly shows the excellent progress that has been made by you all in the past decade; and I believe provides some indicators of where we can have the most impact in the coming decade.”

“Over the past decade FiMT has been a valuable partner, sharing insight that has been key to our development of bespoke support for our armed forces community. As we continue on our journey to make the United Kingdom the best place in the world to be a veteran, I commend FiMT on their continued partnership with government to provide us with this invaluable insight.”