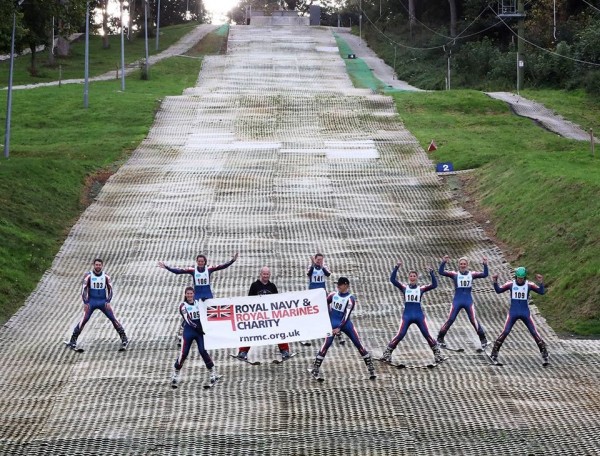 A fearless group of Royal Navy skiers have completed a gruelling 24-hour world record attempt in order to raise money for the Royal Navy and Royal Marines Charity (RNRMC).

The team took to the Gloucester Dry Ski Slope on Thursday 28th September with the aim of skiing from 5pm to 5pm the next day. The distance that the group aimed to ski would break the world record for distance skied on an artificial slope.

Despite initial problems with the ski slope’s drag lift, the Royal Navy skiers got off to a flying start on the Thursday evening. Supported on their first leg by Paralympic skier Millie Knight and her guide, Royal Marine, Brett Wild, the team were given amazing encouragement as they carved into the night.

Kindly supplied with coffee and food throughout by the Gloucester Ski Centre, the team pushed through until morning without stopping.

Leading up to the finish line of Friday morning, the ski slope played host to a number of spectators, local news stations and the famous faces of Eddie ‘The Eagle’ Edwards and Gloucester Rugby stars, Ben Morgan and Lloyd Evans.

Speaking about the difficulty of the challenge, LAET Tom Horst said:

“I think we all knew it was going to be difficult. The worst part was going up on the button lift. Each lap was two and half minutes on the lift which added up to approximately 13hrs in total.

“That was the worst bit, topped up with rain in the early hours. More rain followed in the morning which meant most people had boots full of water for 8 hours.”

However, despite the event being difficult, the team were proud of the effort put in. LAET Horst said:

“There is a huge sense of satisfaction amongst the team. Everyone can hold their heads up high in what was a monumental effort. Ultimately, it was about making money for the RNRMC we are pleased to have achieved.”

“Having genuine support from future Olympians, previous Olympians and high level sportsmen meant a lot. When you’re receiving praise from people at the top of their sport, it makes it that extra bit special.”

After 24-hours of skiing the team finished their challenge, falling just short of the Guinness World Record. However, the team managed to raise over £1,500 for the RNRMC which will go toward supporting sailors, marines and their families, for life.

Director of Fundraising and Marketing for the RNRMC, Alasdair Akass said:

“We are incredibly grateful and thoroughly impressed by this astounding fundraising effort. The determination demonstrated by this group of elite skiers shows just how hard people are willing to work to raise money for the Royal Navy and Royal Marines Charity.

Well done to Royal Navy Ski Team and thank you to the special guests who supported the event. It was a triumph all round.”

The Royal Navy and Royal Marines Charity is the principle charity of the Royal Navy. It exists to support sailors, marines and their families, for life.

Since 2007, it has funded projects and facilities that boost morale for those who serve today. It also distributes millions of pounds annually to military charities which care for the children, families and veterans of the Royal navy and Royal Marines.