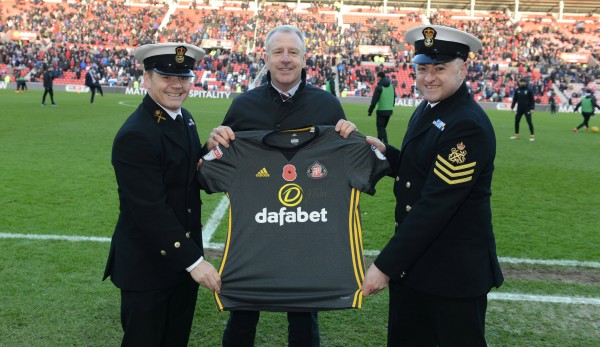 Sunderland AFC have teamed up with the Royal Navy and Royal Marines Charity (RNRMC) to raise funds to help support sailors, marines and their families.

The club have generously donated 21 signed match day shirts from their local derby against rivals Middlesbrough in November. The shirts will be auctioned through the RNRMC’s website and the auction is live now on www.rnrmc.org.uk/SunderlandAuction

Donated to the RNRMC to mark November’s Remembrance weekend, the shirt worn during the match is the team’s away strip and is grey with a gold trim featuring a special Remembrance Day Poppy Insignia.

Each of the shirts being auctioned have been personally signed by a Sunderland AFC player.

As the national charity of the naval service, the RNRMC ensures that all money raised is distributed to those in need across the fleet; to those serving at home and abroad, to veterans and their families. This auction will help to ensure that those who serve in the naval fleet, often for extended deployments, will have a support network to call on if they ever face life through injury, bereavement or illness.

Representatives of the RNRMC were in attendance for the reverse fixture against Middlesbrough last Saturday, with Sunderland AFC Kevin Ball making a half-time presentation to Chief Petty Officers Scott Mather and David Burnside, who are both based at HMS Calliope in Newcastle.

“We’re incredibly grateful to Sunderland AFC for this kind donation. This gesture helps recognise the sacrifice made by those from the north east who have served, or who are serving their country.

“The money raised through the auctioning of these shirts will help us to continue supporting our naval family throughout the fleet.”

“The club is proud to support the Armed Forces wherever possible, and we hope that the funds raised through this auction will help the Royal Navy & Royal Marines Charity in their vital work.

“Service in the Armed Forces is part of the fabric of the North East and we were pleased to welcome the charity’s representatives to the Middlesbrough game.”

To bid on these shirts, visit: rnrmc.org.uk/SunderlandAuction

Since 2007, it has funded projects and facilities that boost morale for those who serve today. It also distributes millions of pounds annually to military charities which care for the children, families and veterans of the Royal Navy and Royal Marines.