You are here: Home / News / News / Soldiering On Award Winner is A Real Inspiration

Soldiering On Award Winner is A Real Inspiration

The Defence Medical Welfare Service (DMWS) Welfare Officer Nathan Cumberland wins the ‘Inspiration Award’ in the 2019 Soldiering On Awards. This prestigious military awards recognises the outstanding achievements of service personnel, both individuals and groups that support the armed forces community. 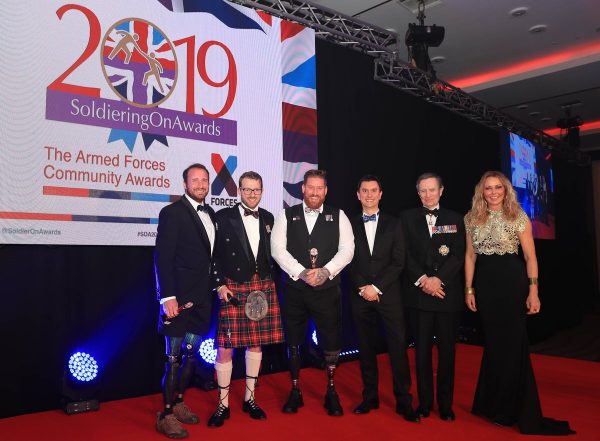 DMWS welfare officer Nathan Cumberland secured the Inspiration Award, sponsored by NatWest, along with fellow nominee Luke Sinnott.  The judges had a hard time deciding the overall winner and therefore awarded two finalists. The ‘Inspiration Award’ recognises a person or group who have overcome significant challenges, injury or disability and whose achievements are an inspiration to others.

Nathan Cumberland said: “Winning this award is a huge achievement, not only for me and the charity Defence Medical Welfare Service but for everyone that has gone through a life changing experience and has used that experience to help and support others fight their own challenges.”

Recce Commander Nathan Cumberland lost both legs and underwent 28 operations following an IED blast in Afghanistan. He has also represented the UK twice in the Invictus Games. Nathan has been a welfare officer with DMWS for almost two years. Through his work as a welfare officer; Nathan supports veterans and their families during times of physical and mental ill health. Having been on the receiving end of welfare support, he knows that additional help in times of crisis is invaluable to both the patients and family members.

DMWS CEO, Paul Gaffney said: “I am extremely proud that the DMWS team has once again been recognised for their outstanding achievements. To win the ‘Inspiration Award’ highlights the significance of Nathan’s personal journey and the difference he continues to make to the Armed Forces community.”

The Award Ceremony at the Park Plaza, Westminster Bridge Hotel on April 5th was an outstanding event, hosted by former Royal Marine JJ Chalmers  and TV personality Carol Vorderman MBE, who is an Honorary Group Captain in the RAF.

Awards Patron the Rt Hon Earl Howe PC Minister of State for Defence and Deputy Leader of the House of Lords said: “It has been humbling and a delight to celebrate the achievements of the Armed Forces Community tonight, at this year’s Soldiering On Awards. Each of the Finalists is a shining example to all of us, with their can-do attitude and valuable skills learnt in the service of our country. 2019 is a milestone year for the Soldiering On Awards, which has evolved to become fully incorporated within X-Forces Enterprise (XFE) following the success of our partnership in 2018. This means that Award winners will be offered on-going support; ensuring that winning a Soldiering On Award is not an end in itself, but the next step to empower and support the aims and goals of each winner.”

In 2018, DMWS also secured the International Award category In recognition of the charity’s commitment to support the Armed Forces community in the UK and abroad. The charity continues to support to Armed Forces Community today, as it has done since 1943.

Find out more and support the work of DMWS at www.dmws.org.uk.