SSAFA’s Sir James Gildea Awards – named after the founder of SSAFA – were created to recognise volunteers and employees for their exceptional contribution and commitment to SSAFA’s activities and values. One such man to receive the coveted honour is Andy McIntosh, Chairman of SSAFA Lanarkshire and late of the Cheshire Regiment. 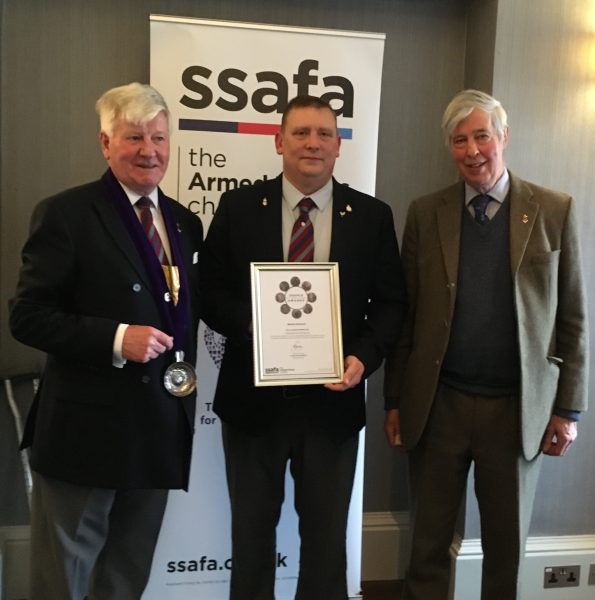 Andy – who has recently made the news because of an arduous ascent of Ben A’an he will make in May – is one of the 2021 cadre of recipients for whom the presentation was delayed because of the pandemic.

It was, however, a bitter-sweet occasion for Andy, because while he took receipt of his award, the event – held at the Moorings Hotel in Motherwell – was also a farewell luncheon for retiring Branch Chairman David McAllister after 25 years’ service to SSAFA.

Of his award, Andy said:

“I was so shocked and amazed to be honoured with a local Sir James Gildea Award because SSAFA means so much to me – especially as I was once a beneficiary, and without SSAFA’s help, well, I wouldn’t be here today.”

Andy, who was SSAFA Lanarkshire’s Branch Secretary for five years before taking up the mantle and challenge of Branch Chairman, added:

“It feels surreal to think what a dark place I was in 10 years ago to where I am now.

“We don’t volunteer for recognition; helping fellow veterans is enough for me, but to be awarded the Sir James Gildea award makes it all so worthwhile.

“I’ve found volunteering at SSAFA to be so rewarding, and giving back to the Armed Forces community helps me maintain my link with the life that made me into the person I am now, and it is an honour for me to give my time for this very worthy organisation.”

For more information, including how you can volunteer, visit ssafa.org.uk.