You are here: Home / News / News / Walking With The Wounded join the team at Hougoumont Farm in Belgium to unearth secrets from the epic Battle of Waterloo.

Walking With The Wounded join the team at Hougoumont Farm in Belgium to unearth secrets from the epic Battle of Waterloo. 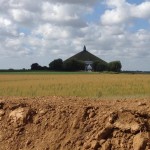 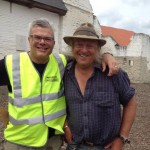 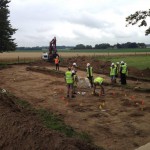 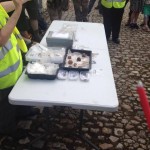 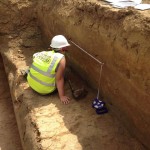 Waterloo Uncovered is “the groundbreaking charity that combines world-class archaeology with veteran care and recovery”. The project began on the farm in 2015, founded by Mark Evans and Charlie Foinette who studied archaeology together at University College London before joining the army. Both chose the Coldstream Guards, the British regiment that played a vital role in the allied victory at Waterloo.

In 2010, returning from Afghanistan, Mark was diagnosed with Post Traumatic Stress Disorder (PTSD). When the MoD began a project to support veterans through archaeology, this revelation got the friends thinking. Inspired by their shared past and the approaching bicentenary of the Battle of Waterloo, the notion struck them of combining the two worlds they knew so well – a bold venture to involve serving personnel and veterans in unearthing the secrets of the world’s most famous land battle — Waterloo Uncovered.

At present, the project has returned to Hougoumont Farm in Belgium where it is more than halfway through its current excavation (8th-22nd July 2017). Last week Lt Col (Rtd) Rod Eldridge (also Clinical Lead for WWTW Head Start) joined them on-site alongside fellow veterans in order to assist with the dig. Rod accompanied the excavation not only as an ambassador for Walking With The Wounded, but also in his own personal capacity as an ex-serviceman:

“What an amazing experience learning about conflict archaeology along with other veterans and students from other nations. Being outdoors, participating and contributing to the understanding of one of the most significant battles of all time was so rewarding.  It was so special to be amongst like-minded people, with the ‘squaddie’ banter and camaraderie!

“I was physically exhausted most days, but it was good to graft and get a sweat on, my ‘nurses-soft’ hands now have several blisters! I feel like a new man so relaxed and happy, I can’t believe the change in me. This was the first time since leaving the Army in 2012 with mental health difficulties that I have been afforded the chance to be a beneficiary. I think we forget to care for the carers. Waterloo Uncovered has been a much needed tonic which I’d recommend for anyone.

“I wish to thank all involved in this marvellous charity and wish them well over next few days as the dig continues.”

Throughout the dig, Waterloo Uncovered held ‘Reading To Remember’ – a sponsored event, where participants took turns reading personal and historical accounts of the Battle of Waterloo, lasting 11 hours – the duration of the historical battle. The readings took place in the chapel at Hougoumont Farm, where the wounded took refuge in 1815. The readings commemorated the battle and aimed to raise awareness of the ground-breaking work done by Waterloo Uncovered on the battlefield since 2015.

Do you know someone who might benefit from the Waterloo Uncovered project? Find out more: http://www.waterloouncovered.com/

Alternatively, if you or a friend need mental health support after leaving the Armed Forces, get in touch with our Head Start programme: headstart@wwtw.org.uk