Do you know an exceptional woman, man or team in UK defence? Why not nominate them for a Women in Defence UK award?

Women in Defence UK is an independent group created to provide a platform for networking, discussion and the exchange of ideas and experiences for the thousands of women working at all levels of UK defence. PA Consulting have been a key sponsor since its inception.

Women in Defence UK exists for a community of people who wish to promote the value of women in defence. We aim to encourage women to succeed authentically, share experiences, build networks and encourage talent at all levels to join the Defence sector.

The inaugural Awards in 2016 was a runaway success, receiving over 200 nominations in 5 categories. The Dinner for 120 at the Honourable Artillery Company was attended by senior officers such as CDS, CDP, 2SL, AMP, Dir Pers (Army) and senior MOD Civil Servants such as DG HO&Cs and Dir Head Office. We expect the number of nominations to increase this year and are planning a bigger and even better event.

Follow this link to more information on the awards.

Join us on LinkedIn   – you don’t have to be a member to nominate someone  but it’s free to join! 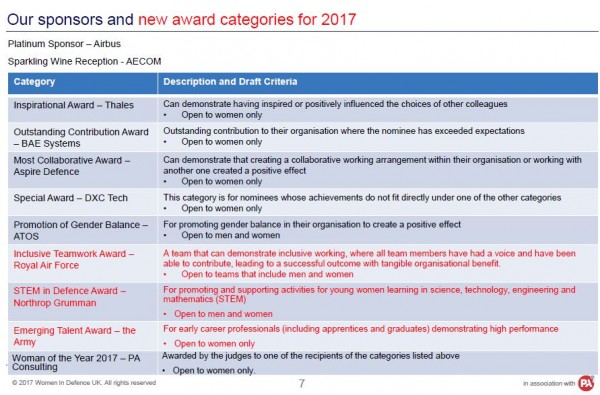