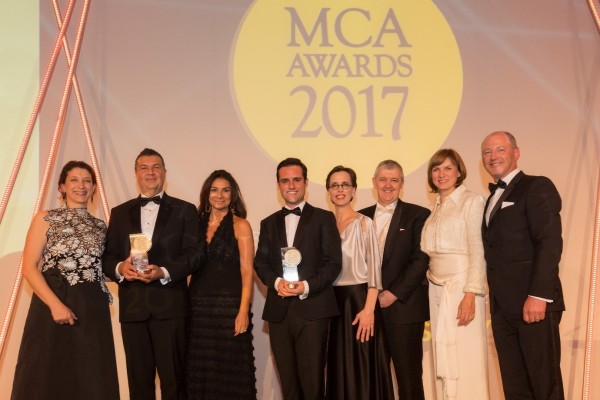 On Thursday 27th April, X-Forces’ Chairman, Martin Wing, was amongst the project leadership team awarded the Management Consultancies Association (MCA) prestigious Project of the Year Award. Martin has been a consultant for over 20 years working for US based Kepner-Tregoe and most recently Brazilian firm, Integration Management Consulting.

The MCA Project of the Year Award is selected by Judges from the project category winners, for a stand-alone project which has demonstrated exceptional performance across the categories. This year Integration Management Consulting with the Department for International Trade won the Change Management in the Public-Sector Category. Martin lead this project team during his last 3 years at the firm and was delighted to be recognised for both Awards at the end of the night with competition from many of the large, well-known consultancies’.

In January 2017 Martin made the move from Integration to X-Forces full-time, having been a non-executive director from the outset. Martin brings his wealth of experience and leadership expertise to the X-Forces team. Ren Kapur, founder and CEO of X-Forces said, “X-Forces Team are delighted to have been able to secure the full-time services of Martin on the Executive team. He brings a wealth of relevant business leadership experience that will be an enormous benefit, both for X-Forces as we plan to scale and for the benefit of XF Businesses’ growth. Martin’s ability to support growth strategies will be invaluable for the wider community and we are delighted to have this talent as part of our growing team. The fact that he now comes as a UK consulting industry award winner is icing on the cake”.

The MCA Awards are now entering their 20th year and are the benchmark for quality within the consulting industry. They are the ideal way to demonstrate and recognise the value of consulting. They also celebrate how clients and consultants working together achieve the best results.

The Project of the Year Award

Martin has extensive industry experiences gained over 30 years as an engineer and business consultant. He has lead businesses and project teams to achieve their ambitions and has been a business owner for almost 15 years. An engineer by background he began his commercial career with BAE Systems where his affiliation with the Armed Forces has its roots.

He has spent 22 years as a consultant, mostly for US based management consultancy firm Kepner-Tregoe, leading their European operation for five years until 2013. More recently he has built out the European operational capacity of Brazilian firm, Integration. Where he doubled the size of the operation and led a project recognised by the MCA as the Project of the Year 2017.

Martin has now moved from Non-Executive Chairman role to Executive Director and Chairman of X-Forces, a social enterprise that supports the Armed Forces community to explore self-employment and business ownership. He leads on organisation scale up, strategy implementation, governance and operational delivery for the organisation from their London-based Headquarters.

X-Forces is a social enterprise (Community Interest Company) that nurtures entrepreneurial ambition in the UK military community, supporting start-up and scale up businesses which highlights innovative career opportunities for entrepreneurs and entrepreneurs form the community.

The overriding ambition is to provide sustainable and exciting careers through enterprise and employment that provide job satisfaction and security.

X-Forces’ support extends to service leavers, veterans, reserves, spouses, dependants and cadets (over the age of 18).

Since its launch in 2013, X-Forces has supported over 900 start-up businesses to launch, and facilitated £8.9m of seed-capital lending (Correct at 01.05.2017), as an official delivery partner of the government’s Start Up Loans Company.

The MoD has appointed X-Forces as the Business Enterprise Trainer for the Career Transition Partnership, delivering support and training to those expressing an interest in business ownership and self-employment.

X-Forces is headquartered in London, with a further office in Birmingham and remote representatives across the UK. X-Forces is patroned by Lord Young of Graffham, former advisor to the Prime Minister on Enterprise.