You are here: Home / News / News / Forces in Mind Trust celebrates 10 years of impact with a summer reception

Forces in Mind Trust came together with partners, colleagues and friends of the Trust in London on Monday to share the 2011-2021 Impact Report, celebrate 10 years since the organisation was established and look ahead to the future. The event was also an opportunity to thank the many stakeholders FiMT works with. 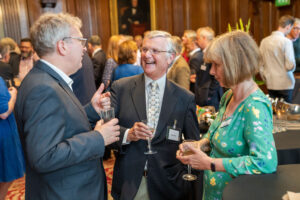 At the event Mike Ellicock also announced that he will be standing down as Chief Executive of FiMT, and current Director of Programmes Tom McBarnet will be taking over as Acting Chief Executive on 20 June.

FiMT’s Chair Hans Pung shared some of the most impactful projects FiMT has funded since it was founded in 2011, including:

The event also gave FiMT an opportunity to look ahead to the future. Tom McBarnet said:

“It was wonderful to see so many friends and colleagues in person again. After we published our 10 year Impact Report earlier this year, we wanted to get together to celebrate with many of the partners who contribute greatly to our work. Collaboration is at the heart of Forces in Mind Trust, which is evident in so much of the work that we do. We are grateful to those who joined us on Monday, and the many others we work with who could not. As we enter an exciting new period and the second half of Forces in Mind Trust’s 20-year  endowment, our brilliant staff team is busy working with partners to ensure that we can have an impact on the Armed Forces Community and work towards our mission to that all Service personnel and their families can have a successful transition to civilian life.”

You can read the Impact Report here.