You are here: Home / News / News / London Poppy Day gets underway in bid to raise £1m in one day 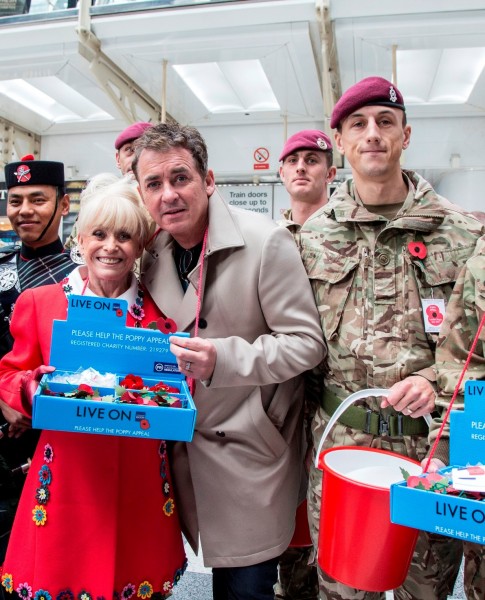 Barbara Windsor and Shane Richie get behind London Poppy Day 2017

2,000 collectors hit the capital’s streets in aid of the Poppy Appeal
London Poppy Day, the largest one-day street collection of its type in Europe was underway today, as 2,000 collectors including uniformed personnel, from the Royal Navy, the Army, and the Royal Air Force, veterans and supporters, hit the streets in a bid to raise £1m for The Royal British Legion’s Poppy Appeal.

Collections took place at 68 tube stations and mainline stations across the city alongside performances by military bands at ten stations. The familiar voices of beloved Londoners Barbara Windsor and Shane Richie could be heard across the tube network encouraging Londoners to get into the spirit of the day and to give generously.

The money raised will go directly towards the charity’s work providing support for serving personnel, veterans and their families.

London Poppy Day was founded in 2006 by a group of young veterans working in the City, whose aim was to remind people that veterans of all ages and backgrounds are living amongst Londoners and to help change their perceptions of what a veteran is.

Claire Rowcliffe, Director of Fundraising for The Royal British Legion, added; “The support that the people of London and the thousands of volunteers who work behind the scenes have given over the last 12 years has made London Poppy Day the success that it is. Having serving personnel collecting all over the city reminds us that the Armed Forces community are all around us and we hope that Londoners will get in the spirit of the day and show their support for them by wearing their poppies with pride.”

London Poppy Day collectors (including veterans) will be able to travel by train to London for free thanks to the rail industry’s support.

The poppy and the work of the Legion are often associated with the First and Second World Wars and elderly veterans, however, for Poppy Appeal 2017 the Legion is encouraging the public to rethink remembrance and recognise that their poppy supports the Armed Forces community past and present, and is a symbol of both Remembrance and hope.