You are here: Home / News / News / Princess Royal Commends Supporters of the RNRMC at London Reception

Princess Royal Commends Supporters of the RNRMC at London Reception 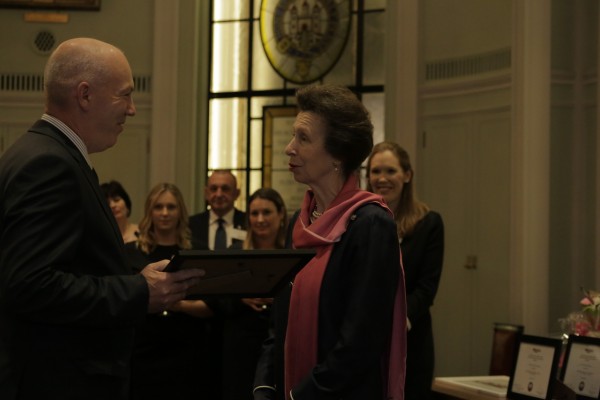 The hard work and commitment of Royal Navy and Royal Marines Charity (RNRMC) supporters was celebrated with a presentation by Her Royal Highness Princess Anne.

As the national charity of the Royal Naval Service, the RNRMC is reliant upon a vital network of loyal supporters who help ensure it achieves its charitable goals.

The Supporters Reception, hosted at Trinity House in London, celebrated the commitment undertaken by the charity’s volunteers, fundraisers and corporate sponsors.

As Patron of the RNRMC, HRH Princess Anne was in attendance to award a select group of supporters with framed achievement certificates that recognised their individual efforts.

One of the groups receiving the award from the Princess Royal was the Solent Committee – a mix of Royal Naval veterans, serving personnel, their families and civilians. This essential team of volunteers help support the South Coast and Central areas of the United Kingdom.

Others included in the awards presentation were the Britannia Royal Naval College, the WRNS 100 walkers and select individuals who have excelled on behalf of The Royal Navy and Royal Marines Charity.

Award recipient John Branson, a member of the Solent Committee, said of receiving his award:

“It was a huge honour to be recognised by Her Royal Highness Princess Anne for my work with the RNRMC. As a former member of the Royal Navy, I understand how important it is to support charities like the RNRMC. That is why I continue to contribute my time towards such a great cause.”

“All those days selling merchandise, collecting money and passionately talking to people about the RNRMC and the Naval Service has proved to be so worthwhile. I am incredibly proud of the work I do with the charity and hope to continue for as long as possible.”

Another of the evening’s award recipients, WO1 Andrew Rainey, has been volunteering with the RNRMC since 2014. Hailing from the West Country, Andrew has recently left the Royal Naval Reserve after completing his 40th year in the service. In the spirit of “giving something back”, WO1 Rainey has excelled for the RNRMC by helping grow the pay roll giving initiative-  managing an astonishing 90% sign up rate of those he presents to.

Describing his volunteer commitments with the RNRMC, Andrew said:

“Volunteering keeps me busy in my spare time but I wouldn’t swap it for anything else. I really enjoy doing something worthwhile.  Volunteering is great and I’d certainly recommend it.”

Having been the Patron of the charity since its inception in 2007, the Princess Royal met supporters and members of staff throughout the evening before making a short speech in which she praised the charities supporters and emphasised their importance to the Naval Service.

“The supporters here this evening are the lifeblood of our charity. Without the help of these fantastic volunteers, fundraisers, corporate sponsors and ambassadors, the charity would cease to exist. For the work they do, we sincerely thank them.”

In attendance at the Supporters Reception was Admiral Sir Philp Jones KCB, ADC, First Sea Lord and Chief of the Naval Staff, who was accompanied by his wife Liz Jones – also a supporter of the charity.

The Royal Navy and Royal Marines Charity exists to support sailors, marines and their families, for life. The charity has recently reached its tenth anniversary and continues to be the national charity of the Naval Service and one of the leading Armed Forces charities in Britain.