Seafarers UK and Sea Cadets have won the STEM Award at the first national Maritime UK Awards event, held in Southampton on Thursday 19 September. The STEM category was sponsored by DFDS and the award was for Seafarers UK’s ‘Marine Engineering Pathway’ project, delivered in partnership with Sea Cadets. 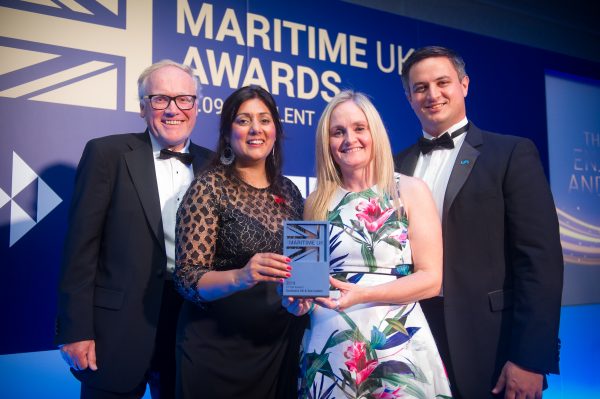 Seafarers UK and Sea Cadets were jointly recognised for their three-and-a-half year partnership project that has so far engaged more than 20,000 school students across England, Wales, Scotland and Northern Ireland with tailored, practical workshops and lessons in marine engineering concepts such as buoyancy and propulsion, helping students and schools to understand more about their GCSE options when pursuing a STEM-linked career.

“It was an honour to see this joint Seafarers UK and Sea Cadets partnership project up in lights in front of such a fantastic industry audience at the Maritime UK Awards. Winning the DFDS STEM Award is a great boost for this collaborative effort as our project seeks to engage with a further 40,000 school children over the next two and a half years, opening their eyes to maritime opportunities and careers in general but in particular to the world of marine engineering.

“We are also grateful to Maritime UK for choosing Seafarers UK to be its first Maritime UK Awards charity partner, and to all those who dug deep into their pockets on the night in order to help support our on-going work as we strive to make as much impact as we can. Our grant funding, working with expert delivery partners, ensures that the seafarer is supported at all stages of their life journey, including those who aspire to work at sea and are in training or education.”